LOPEVI VOLCANO ALERT BULLETIN No12 issued by the Vanuatu Meteorology and Geohazards Department (VMGD) on 9th October 2017 at 9:18AM :

The current volcanic unrest at Lopevi is continuing in a steady state and the Volcanic Alert Level remains at Level 2. The volcanic unrest is likely to continue and there is a chance some eruptions may follow. Danger is restricted to visitors on the island.
The small 7-km-wide conical island of Lopevi (Vanei Vollohulu) continues to show signs of volcanic unrest. Observation flights on 30th September, 1st, 3rd and 6th October 2017 show that the activity at the volcano is only occurring in the active craters below the summit crater. Photographs and thermal infrared images taken during observation flights confirm the activity consists of hot volcanic gas and steam. No eruptions are currently occurring. 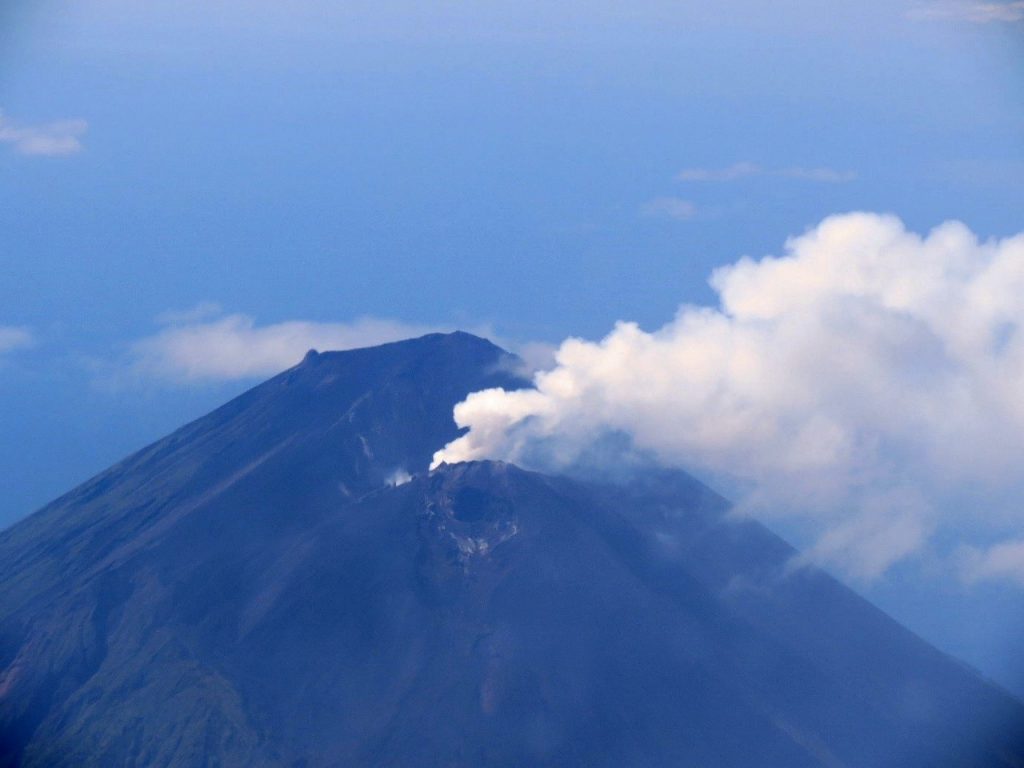 In the past volcanic unrest at Lopevi has led to small or short-lived eruptions. There is a chance some eruptions may follow the actual unrest.
The last eruption at Lopevi was on 13 January 2017. This was a short-lived steam and gas eruption. The Volcanic Alert Level (VAL) was raised to Level 3 at the time of the eruption, and lowered to Level 2 on 17 January. It was further lowered to Level 1 on 20 February. Following the observation of steam plumes on the web camera (http://www.vmgd.gov.vu/vmgd/index.php/geohazards/volcano) on 23 September the VAL was again raised to Level 2. Level 2 indicates ‘Major Unrest’; Danger around the crater rim and specific area, considerable possibility of eruption and also chance of flank eruption. 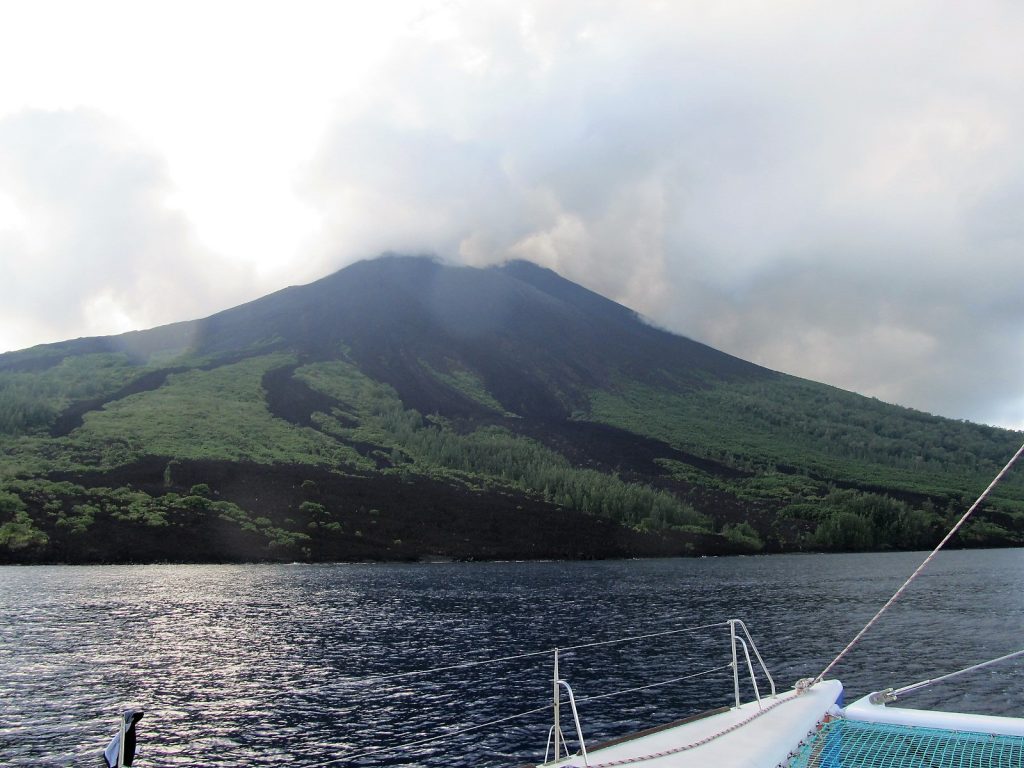 Lopevi is one of several frequently active volcanoes in Vanuatu. Ash producing eruptions can occurred every 3-10 years. The volcano has been active during historical time at both summit and flank vents, producing moderate explosive eruptions and lava flows that reached the coast. Historical eruptions date back to the mid-19th century. The island was evacuated following major eruptions in 1939 and 1960. Today very few people live on the island.
This is another reminder that all visitors to Lopevi may be affected by the volcanic unrest. It’s very important that authorities, communities, villages from the islands of Paama and Epi take this information into consideration.
The Vanuatu Meteorology and Geohazards Department will continue to closely monitor this volcanic activity.

8 OCTOBER 2017. The Rincón de la Vieja volcano (northwest) today sent gas to 700 meters above the crater while the Turrialba (east) erupted ash about 500 meters, reported the Volcanological and Seismological Observatory of Costa Rica (Ovsicori).
A change in the direction of the winds towards the southeast caused that the ash of the Turrialba fell on near communities like Santa Cruz, the Verbenas, Santa Teresita, Vargas Street, Guayabito and La Isabel, something that rarely happens.
This volcano, located in the canton of Turrialba, province of Cartago (east) has maintained constant activity for three years and since Monday carries out eruptions more closely with columns considered small that rise about 500 meters above the crater.
An eruption today was recorded at 07h00 local time (13:00 GMT). 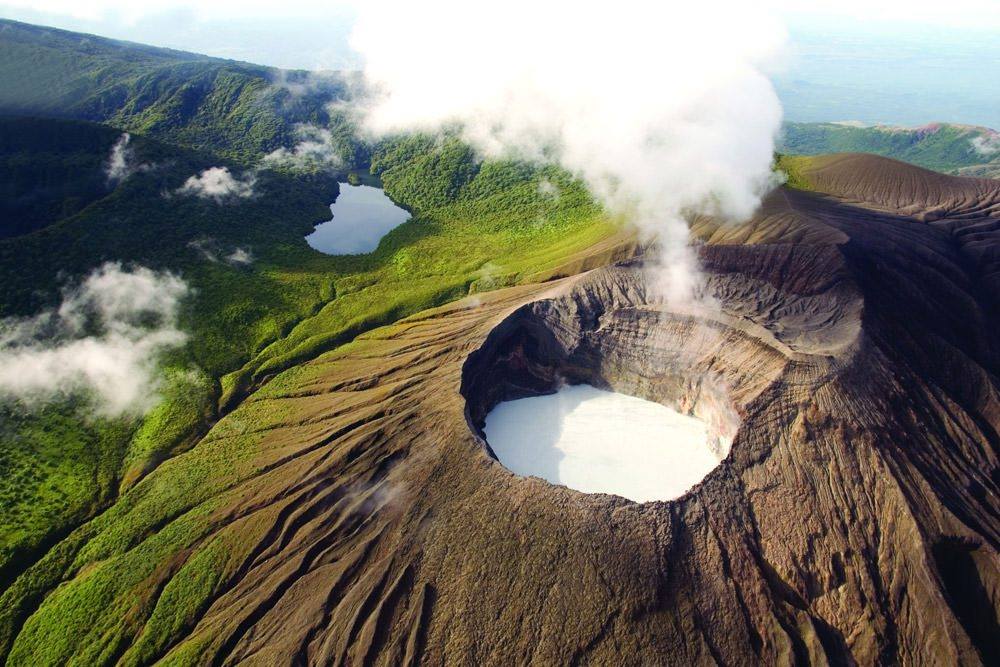 The Ovsicori also reported a gas eruption of 700 meters above the crater of the Rincón de la Vieja volcano, located in the province of Guanacaste, in the northwest of the country..
The activity took place at 08h48 local time (14h48 GMT), lasted approximately one minute and did not represent a danger to nearby communities.
The Rincón de la Vieja, with its crater at 1,916 meters above sea level, and Turrialba, with its summit at 3,340, are two of the three most active volcanoes in Costa Rica and its eruptions have been frequent in recent years. The third volcano of constant activity is Poás, located in the province of Alajuela (center).

Poás Volcano: this volcano maintains a slight but constant degassing, the seismic signal presents a low activity level, there are no eruptions of ash, there are no reports of sulfur odor.

There have already been 58 earthquakes located in the southern part of La Palma and surely more that have not been located. The seismic swarm began on the morning of October 7, the last earthquake this morning on October 9 at 6:11 am.
The National Geographic Institute (IGN) will increase volcanic monitoring in La Palma. Tomorrow Tuesday will begin the installation work of three mobile stations of the volcanic monitoring network, in addition to the five fixed in operation.
The Director of the National Geographic Institute (IGN) in the Canary Islands, María José Blanco Blanco, will visit the island with a multidisciplinary team specializing in geodetic, geophysical and geochemical techniques to monitor the earthquake zone. 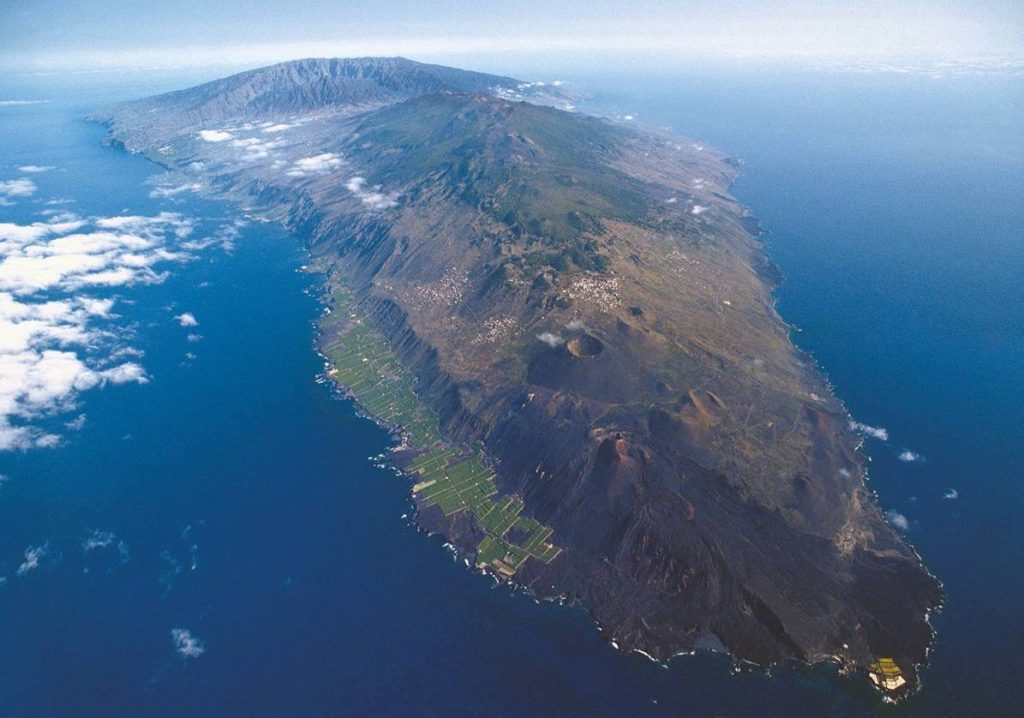 « At the moment, we can only verify the seismic activity that is continuing but with a much lower frequency, and is located in the same region, in the north of the Canary Islands, where all the seismicity is located since the beginning of the » « said Blanco, adding, » It seems that they are located at a lesser depth, but it is true that errors in the depths do not allow us to confirm that they are getting smaller and smaller.  » We will do a densification of the volcanic monitoring network in La Palma with three new mobile stations, « he said.

Yesterday, María José Blanco said the earthquakes are analyzed in detail, noting that « this is the first time that there has been a series of earthquakes in La Palma since the island has an instrumentation » . To this end, he recalled that the seismic monitoring network was started in the 1970s, approximately, with a first station in the ravine of Las Angustias.
He insisted that « since we have the network, which is dense for a short time, there has never been any seismicity of this style. » He stressed that « there is more seismicity than what is recorded, but some are not noted because they are very small earthquakes ». 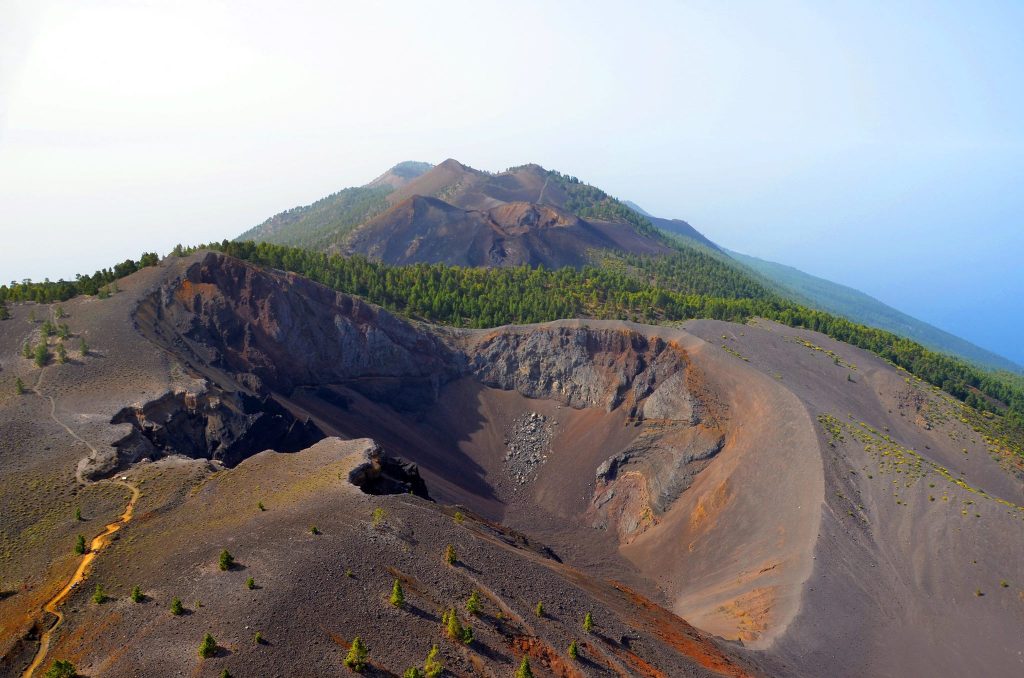 Last hour: In view of the unusual seismic activity – seismic swarms – registered last Saturday in La Palma, the Ministry of Territorial Policy, Sustainability and Security of the Government of the Canary Islands, under the Special Plan of Civil Protection and Volcanic Risk Emergency (PEVOLCA) meeting will be held on Wednesday, 11 October, with the Scientific Committee for Volcanic Evaluations and Monitoring, to evaluate data obtained from networks and monitoring stations in the ‘island.

The 47-km-long wedge-shaped island of La Palma, the NW-most of the Canary Islands, is composed of two large volcanic centers. The older northern one is cut by the massive steep-walled Caldera Taburiente, one of several massive collapse scarps produced by edifice failure to the SW. The younger Cumbre Vieja, the southern volcano, is one of the most active in the Canaries. The elongated volcano dates back to about 125,000 years ago and is oriented N-S. Eruptions during the past 7000 years have originated from the abundant cinder cones and craters along the axis of Cumbre Vieja, producing fissure-fed lava flows that descend steeply to the sea. Historical eruptions at La Palma, recorded since the 15th century, have produced mild explosive activity and lava flows that damaged populated areas. The southern tip of the island is mantled by a broad lava field produced during the 1677-1678 eruption. Lava flows also reached the sea in 1585, 1646, 1712, 1949, and 1971.

Compared to the previous week, the number of explosions decreased slightly, reaching an average of 42 events per day. Seismic activity continues to show a predominance of earthquakes related to the movement of magmatic fluids (Long Period). Events that indicate the rise of magma (hybrids) and ash emissions (trembling) maintain a low level of activity. 
The eruptive columns of gas and ashes reached 3500 m above the crater (similar to the previous week). The dispersal of this material occurred within a radius of more than 40 km, mainly in the north, northwest and west directions. 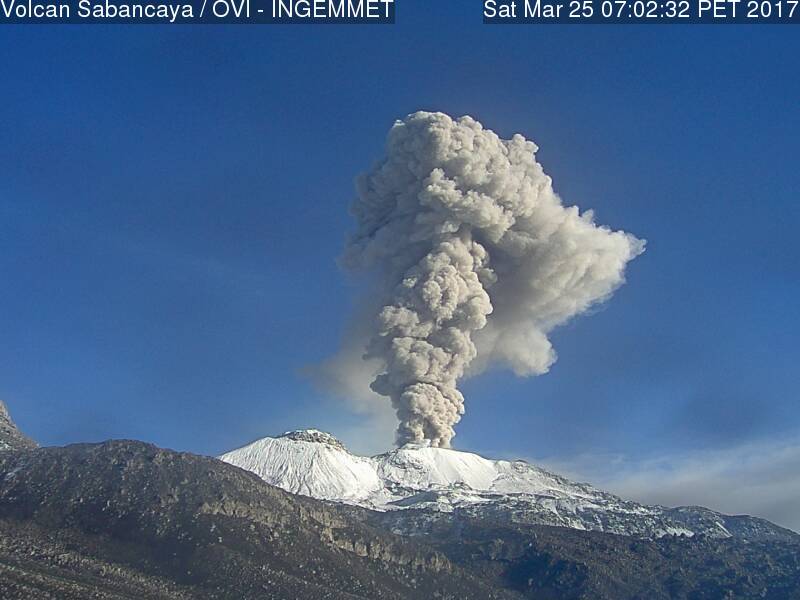 
Deformation monitoring at the SBSE GNSS station during the last week did not record any significant changes. 
The largest volcanic gas flow (SO2) was recorded on October 4th with 1753 tons / day, a value deemed important. 
Ten thermal anomalies were recorded according to the MIROVA system, with values ​​between 1 MW and 99 MW of VRP (Irradiated Volcanic Power).

Eruptive activity maintained levels similar to those recorded the previous week. No major changes are expected in the coming days. 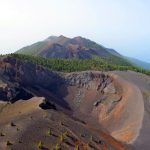 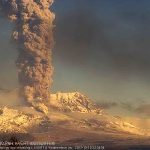