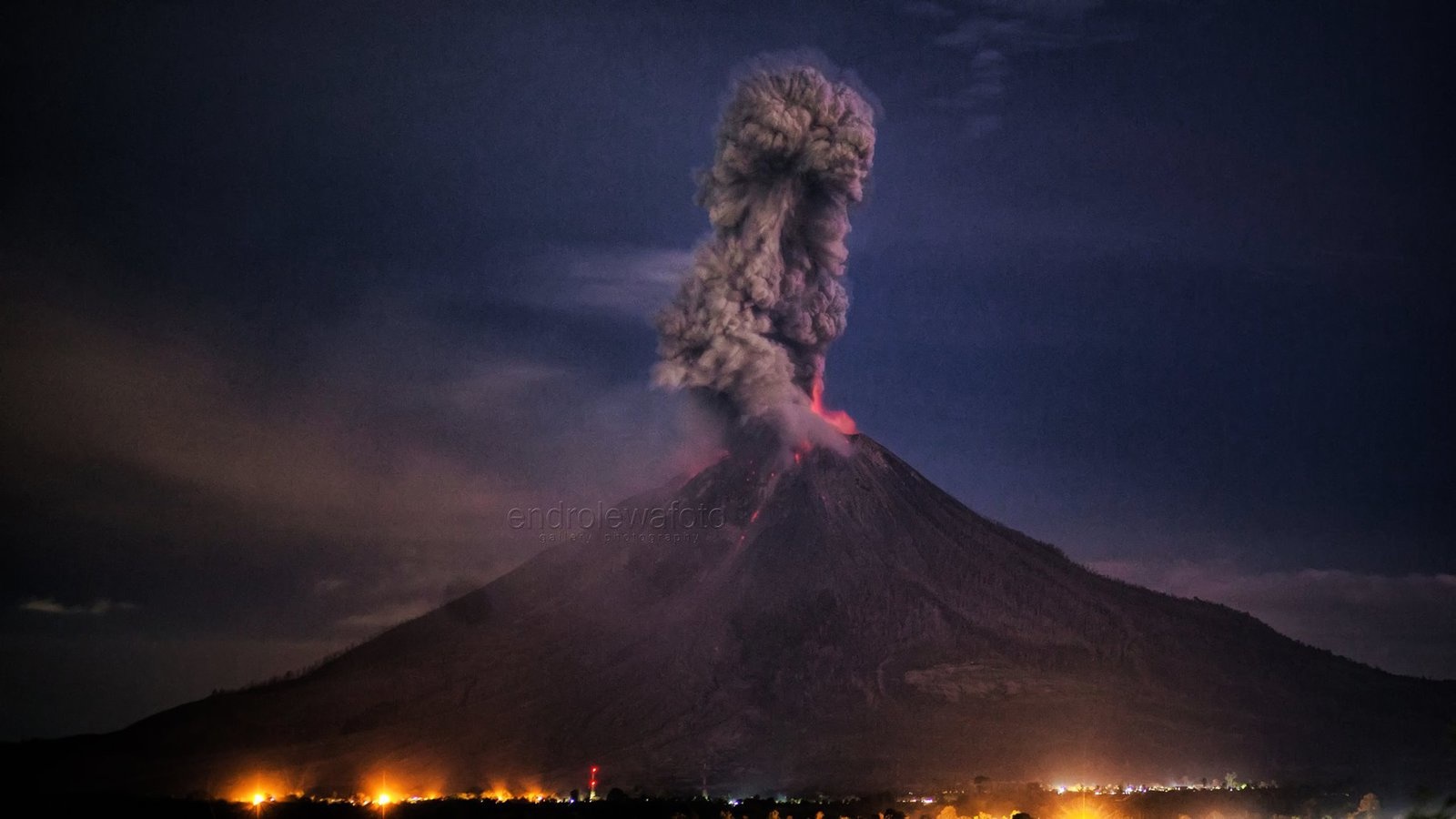 24 SEPTEMBER 2017. Vanuatu’s National Disaster Management Office are on Ambae conducting a full-day assessment on the island’s volcano following recent activity. Vanuatu’s Geohazards Department raised the official alert threat from level three to four as an eruption on Ambae island continues to intensify. The alert levels range from 0 to 5 – level five is a very large eruption. 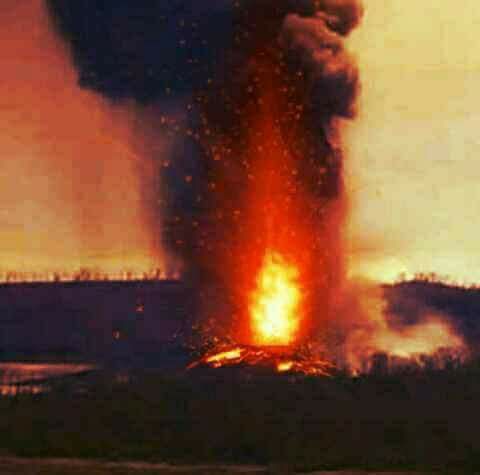 The National Disaster Management Office along with a team from the Geohazards department left early Sunday morning for Ambae. On Saturday, authorities were preparing to evacuate as many as 5,000 people from one side of the island to the other as the volcano belches ash across much of the island. 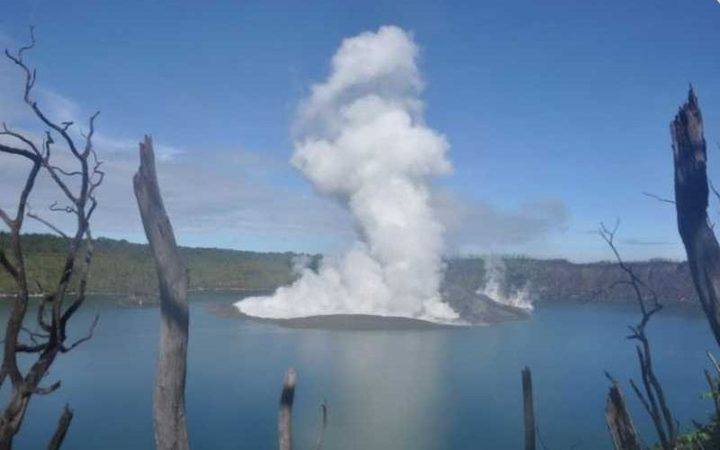 The volcano is one of the most active in the world, but its activity has picked up steadily in the past couple of weeks. The director of the National Disaster Management Office, Shadrack Welegtabit, said the eruption was starting to look serious, and officials would look at a large-scale evacuation. 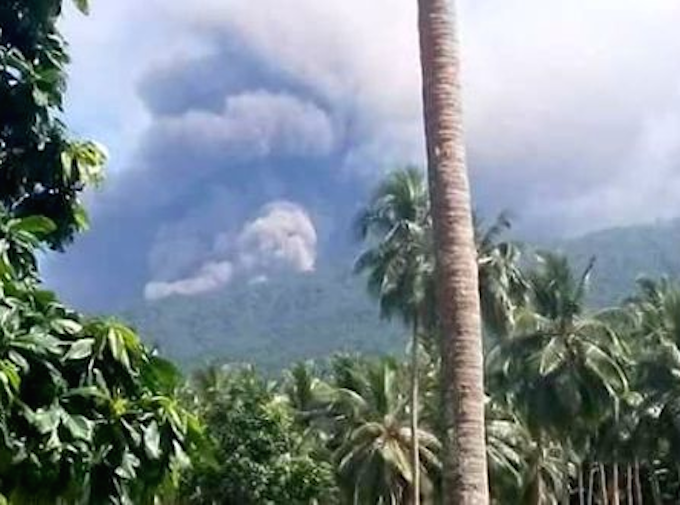 Mr Welegtabit said half of the island’s population of about 10,000 would be moved from one side to the other. « It will be a big operation. We are talking about roughly 5,000 people that we have to move. Once all the ground arrangements is done in terms of preparing evacuation centres and stuff then we are looking at moving people. That is going to happen very soon, » he said.
The last significant eruption on Ambae was in 2005, when a similar evacuation was carried out. It was as long as three months before people could return to their villages.

Increased volcanic activity and the increasing seismic status of Mount Agung (3142 m altitude) in Karangasem Regency, Bali, increased the level of activity from level III (Siaga) to level IV (AWAS) as of September 22, 2017 at 8:30 pm. Seismicity continues to increase considerably. From yesterday to today, the volcano was clearly visible until the fog arrived. A small white smoke emerging from the crater was observed at a height of 200 m above the peak. As a result of the seismograph recording on September 24, 2017, 350 shallow volcanic earthquakes (VB), 570 volcanic tremors (VA), and 67 local tectonic earthquakes (TL) were recorded. On September 25, 2017 from 00:00 to 06:00, 102 shallow volcanic earthquakes (VB), 125 volcanic tremors (VA), 14 local tectonic earthquakes (TL) were recorded. 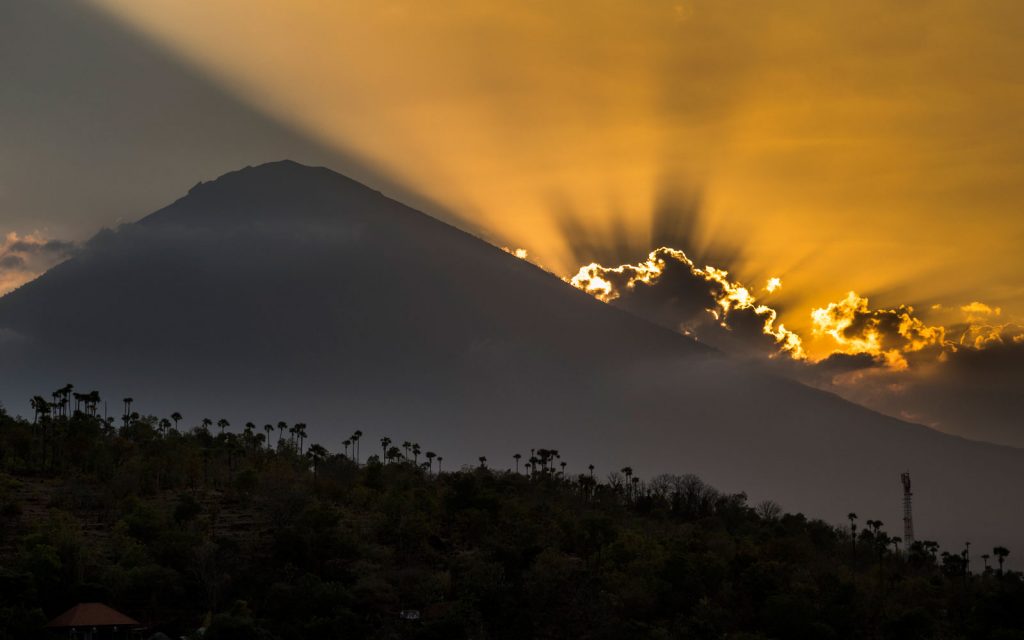 recommendations:
Communities around G. Agung and climbers / visitors / travelers should avoid climbing and not engage in any activity in the danger zone at the bottom of the G. Agung crater as well as within a 9 km radius of the crater from the summit of G. Agung and it was added a sectoral expansion in the North-North-East, South-East and South-South-West over 12 km.

VOLCANO OBSERVATORY NOTICE FOR AVIATION (VONA).
A YELLOW color code was issued, published on September 22, 2017 at 08:45, linked to the increasing activity of the volcanic seismicity, very important. Erupting materials and ash emissions were not observed.

The level of activity is at Level IV (AWAS). The Sinabung (2460 m altitude) from yesterday until this morning was clearly visible until the fog arrived. A small white smoke emerging from the crater was observed at a height of 50 m above the peak. Thanks to the recording of the seismographs, it was recorded 1 eruption / emission of ashes, as well as 45 descents of pyroclastic flows, visually observed to slide up to 500-1000 m to the South-South-East. Dams in the Laborus River, formed by the accumulation of hot cloud deposits, can still cause lahars or floods if they collapse. 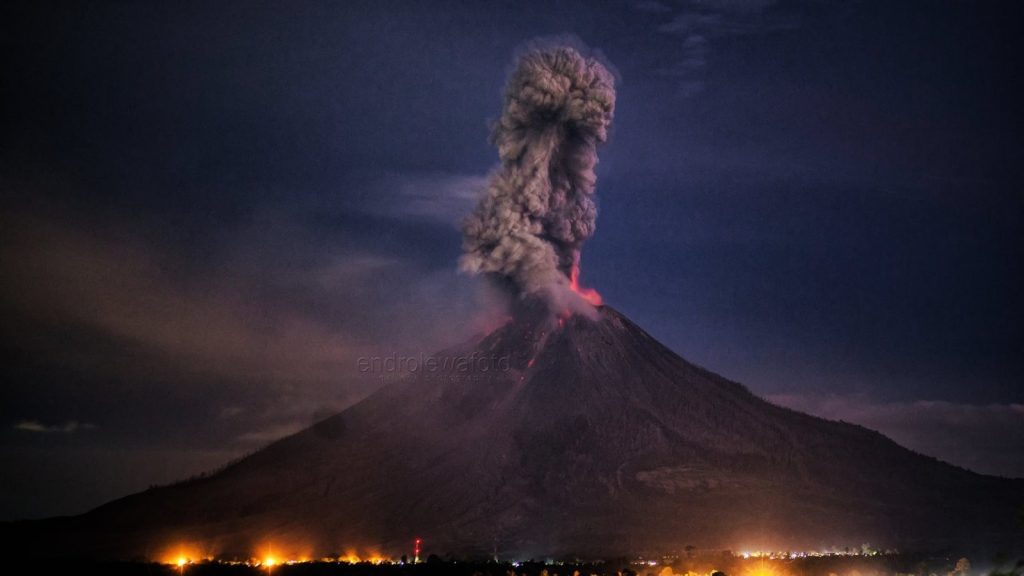 recommendations:
– Communities / visitors should not engage in activities within a radius of 3 km around the peak and, by sector, from the top, 7 km south-south-east, 6 km south-east and 4 km to the east and north.

VOLCANO OBSERVATORY NOTICE FOR AVIATION (VONA).
An ORANGE color code was issued, published on September 23, 2017 at 20:19, for associated eruptions with ash up to 4460 m above sea level or 2000 m above the summit, East Southeast.

LOCATION OF THE MAGMATIC CHAMBER IN THE CAMPI FLEGREI .

Until now, the location of the magma chamber of the Campi Flegrei caldera in Italy was not known. And he was discovered at a different place from what he was supposed to be.
Scientists located under the city of Pozzuoli the potential source of magma that fed the caldera during its last period of activity in the 1980s, when the area suffered a series of small earthquakes.
« The question that has puzzled scientists is where the magma is located under the caldera, and our study provides the first evidence of a hot zone under the city of Pozzuoli, which extends into the sea at a depth of 4 km, « explains one of the study’s leaders, Luca of Siena, from the University of Aberdeen. 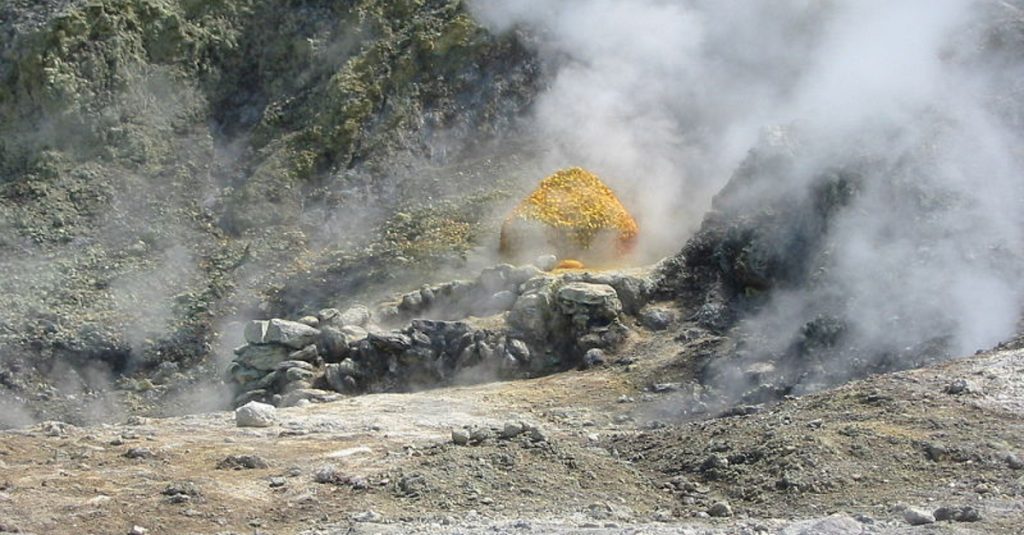 The study suggests that magma could not emerge on the surface in the 1980s due to the presence of a rock formation of one or two kilometers deep which blocked its path, which forced it to take a lateral path.
According to the researchers, the amount of relatively low seismic activity in the area since the 1980s suggests that pressure builds up inside the caldera, making it more dangerous.
« Over the past 30 years, the behavior of the volcano has changed, and everything has become warmer because of the fluids that permeate the entire caldera, » says De Siena. « What produced the activity under Pozzuoli in the eighties emigrated elsewhere, so the danger is not only in the same place, now it could be much closer to Naples, more densely populated, there. 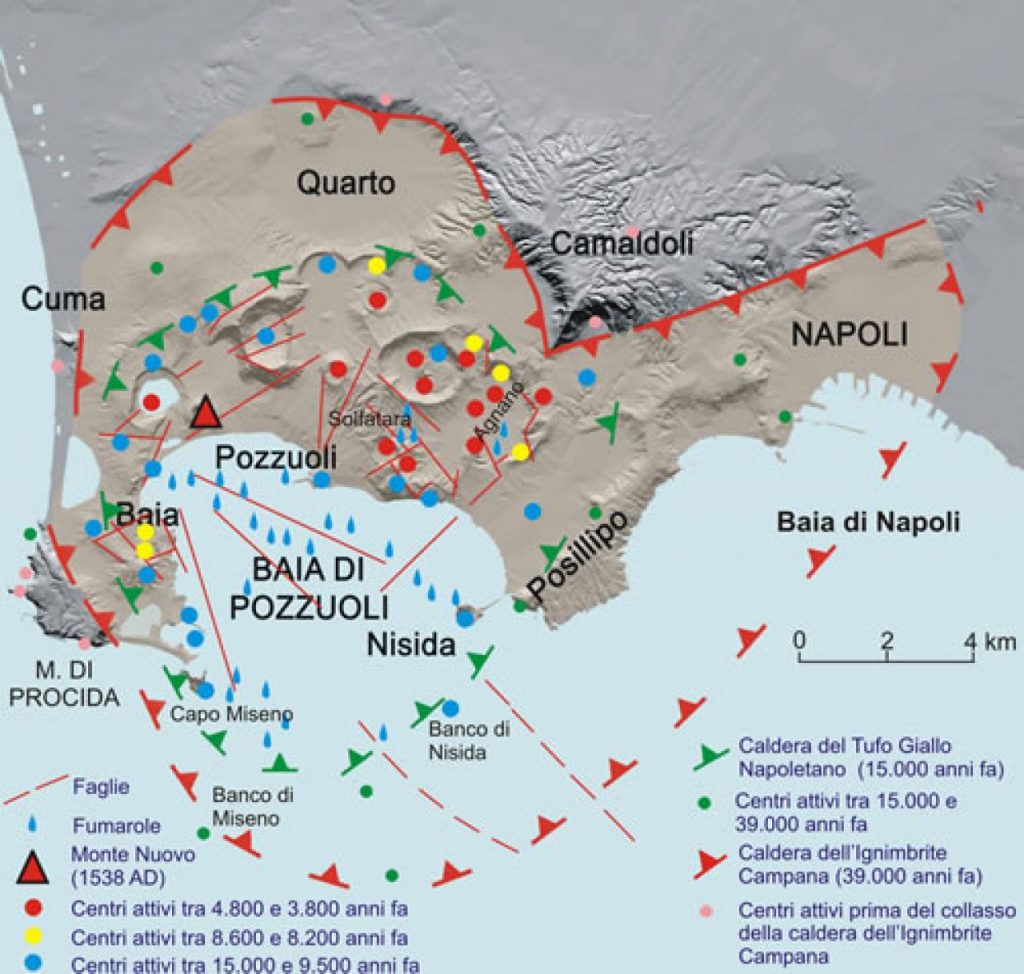 This means that the risk in the caldera is no longer only in the center, but has emigrated. In fact, the researcher describes the Campi Flegrei as « a pot of soup boiling under the surface ».
« We can not say what this means in terms of scale for a future eruption, but there is no doubt that the volcano is becoming more and more dangerous, » continues De Siena. « The big question we need to answer now is: is it a large layer of magma that rises to the surface, or something less disturbing that could find its way to the surface at sea? » 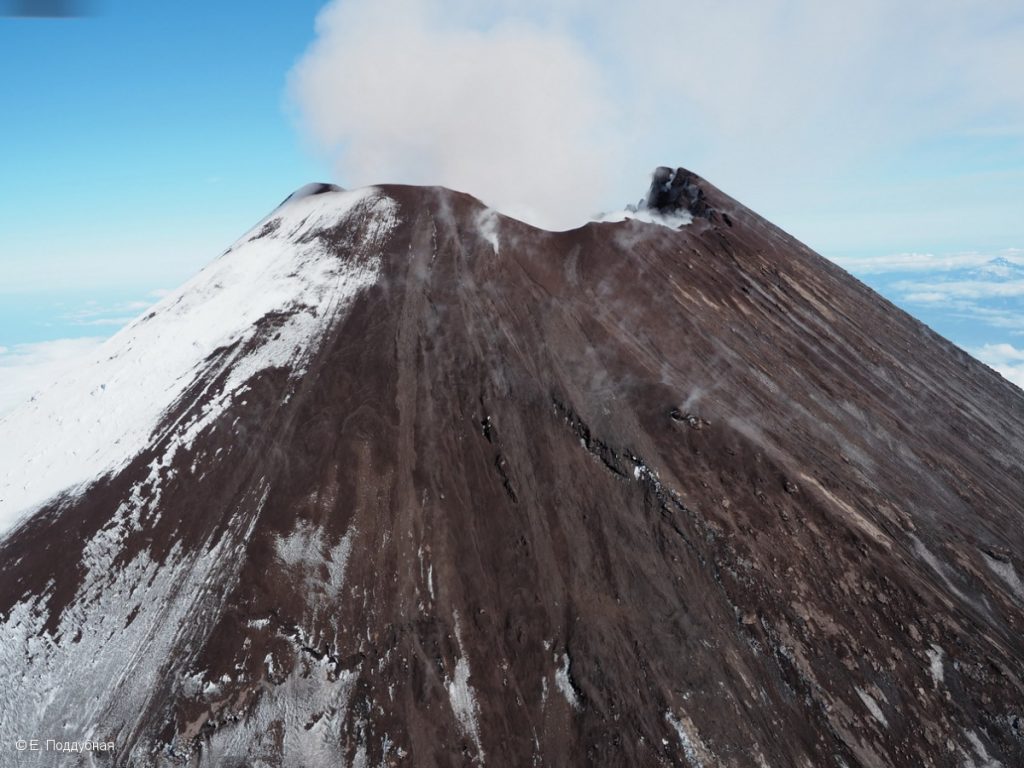 The crater of the volcano Klyuchevskoy on 03 September 2017.

A gas-steam activity of the volcano continues. A danger of strong ash explosions up to 26,200-32,800 ft (8-10 km) a.s.l. is remains. Ongoing activity could affect low-flying aircraft. 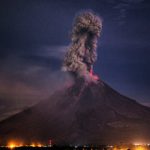 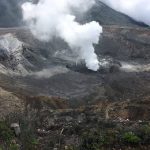