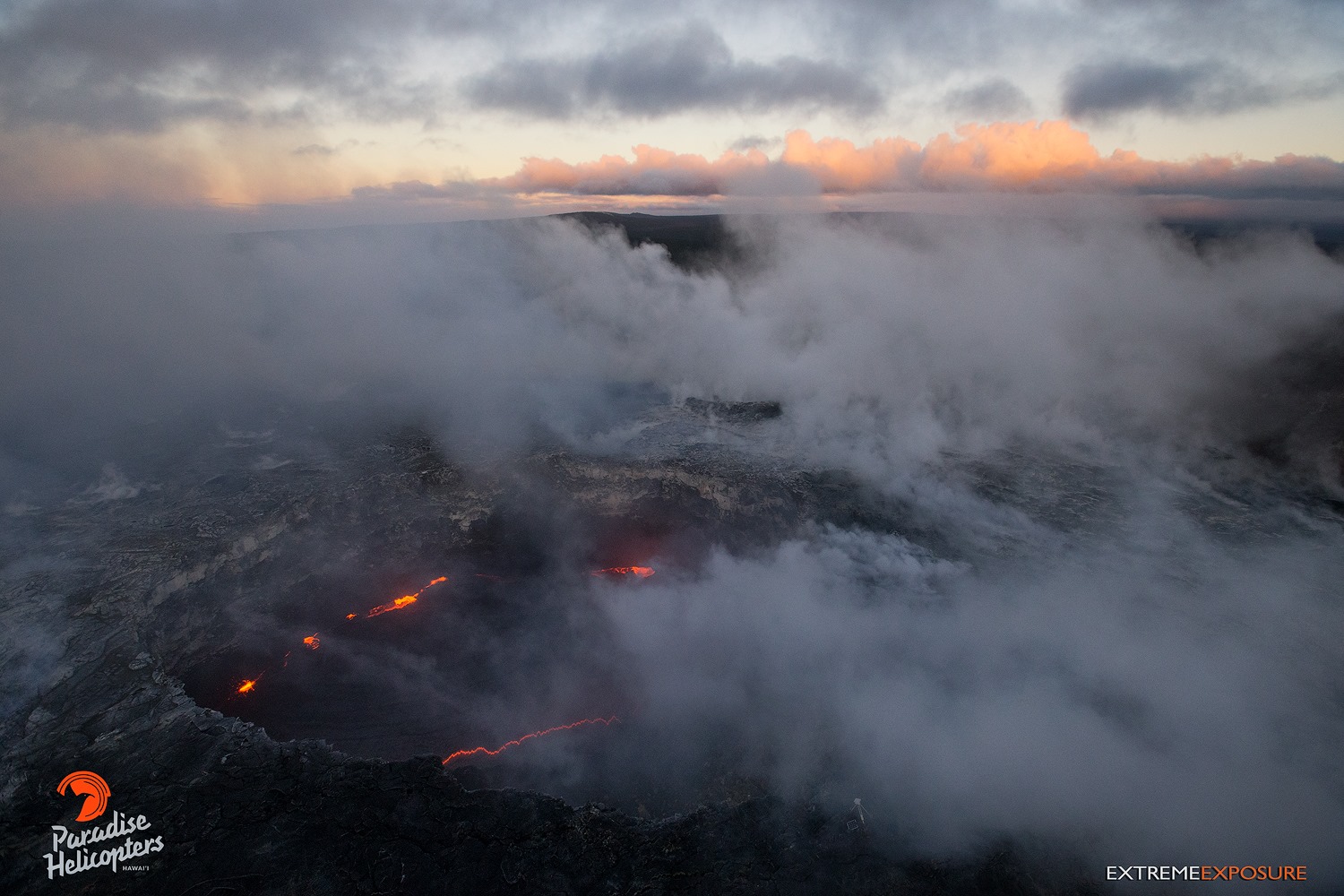 Update on seismic activity on the south-western side of Etna, between 19 and 26 August 2017.

Between 19 and 26 August 2017, the southwestern slopes of Etna were affected by seismic activity with three different swarms.
The first, which occurred on August 19, with 70 earthquakes (36 of which were located with magnitudes between M1,0 and M3,3) in about two and a half hours (from 13:12 to 15:38, hour) and with hypocentral depths between 15 and 20 km, affected the western slope of Etna, near the town of Adrano. The strongest earthquake, magnitude ML 3.3, took place at 13:38 Italian time on 19 August 2017 at a depth of 17 km.
The second swarm, between 25 and 26 August, with 23 recorded earthquakes (10 of which with magnitudes between M1.0 and M3.3) affected an area south of Adrano between the villages of Ragalna and S. Maria di Licodia (CT) with hypocentres in the first 5 kilometers of depth. The main event of this seismic swarm took place on August 25 at 11:57 pm Italian time with a magnitude of ML 3.3 and a depth of 2.6 km.
The third occurred on August 26 in the same area affected by the 19 August swarm, with more than 60 events (17 with magnitude ranging from M1.0 to M3.1) and depths between 15 and 20 km. The strongest earthquake, magnitude ML 3.1, was located at 22:46 near Adrano (CT). 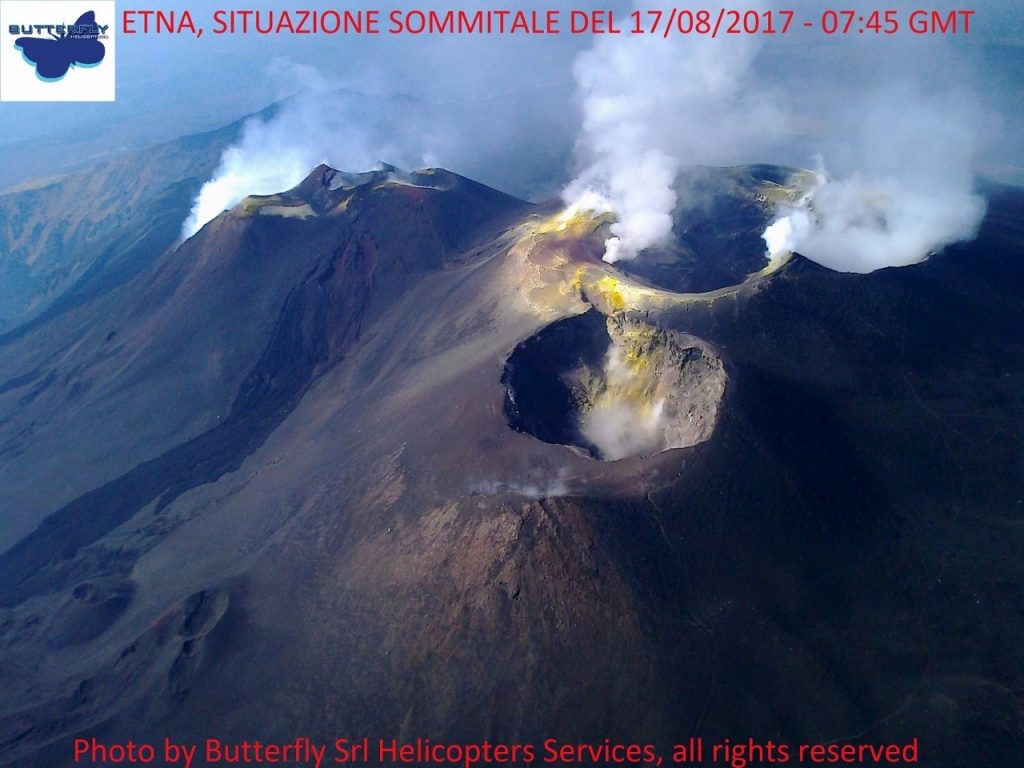 The figure shows the location of the events of the three seismic swarms and the focal solutions of the three main events.
The seismicity described is in volcanic-tectonic events typically recorded on Etna, generated by regional tectonic stresses and / or local stresses resulting from migrations of magma within the crust. In general, the spatial distribution of the seismicity makes it possible to identify different seismogenic volumes characterized by different levels of seismicity and focal depths. In particular, on the east side, earthquakes are essentially located within the first 10 kilometers of depth; unlike on the western side, there are earthquakes with hypocentres located up to 30 km deep.
At the same time as the seismicity described so far, there has been no significant variation in the volcanic activity of the upper craters. 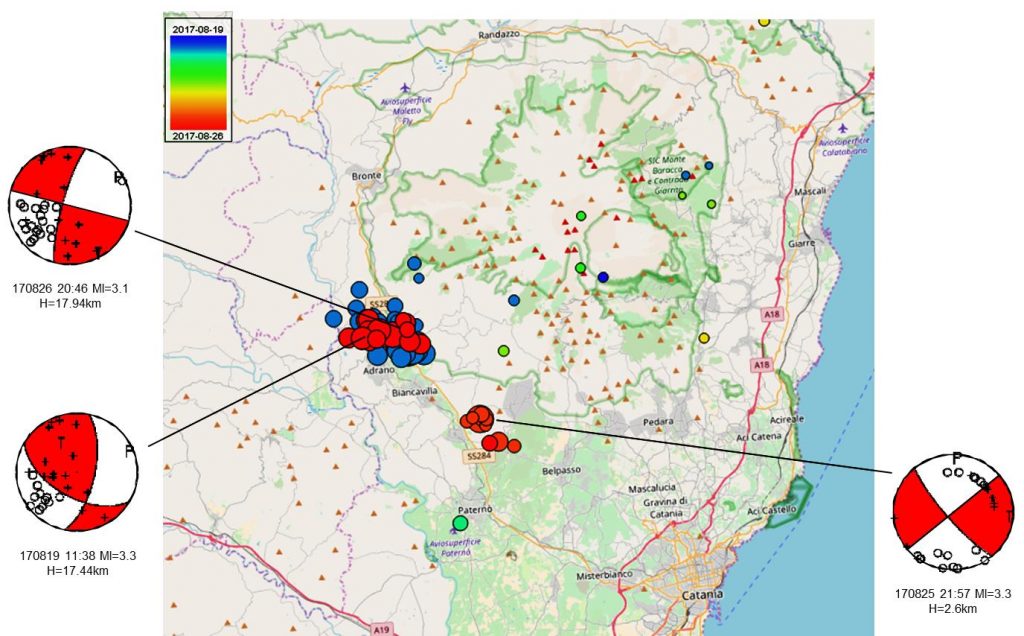 The location of the three seismic swarms and the focal solutions of the three main events (the epicentres are represented in different colors according to their time of occurrence).

However, in the past, studies of the literature correlated the deep seismicity of volcanic phases of the Southwest with deep magmatic recharge phases. In particular, the reactivation of NNW-SSE and NE-SW focused structures in this area of ​​the volcano appears to be associated with changes in its activity status (Alparone et al., 2012).
From an instrumental point of view, it is important to note that the energy release associated with the seismic activity recorded between 19 August and 26 August is the highest observed since 2000 in this volcanic sector (Alparone et al., 2015 Catalog_2000-2010, Catalog of earthquakes in eastern Sicily – Southern Calabria (1999-2017), INGV-Catania).
Among the phenomena associated with the appearance of the seismic swarms described above, a new phenomenon of « secondary volcanism » in the Salinelles of Contrada Cappuccini Vecchi near the Falcone-Borsellino stadium in Paternò (CT) is mentioned. These are, in general, brackish waters and sludge emitted by essentially magmatic gases. Historically, salinelles have exhibited paroxysmal phases of degassing activity that have been monitored by INGV in recent years and correlated with the deep dynamics of Etna. In fact, the main gas reservoirs of the Salinelles would be located at depths greater than 10 km. From August 24, a new eruptive phase began with an intense mud release, which partly invaded the road around the Paternò stadium. According to an inspection carried out on 28 August by INGV-Observatory Etneo staff, it was found that the phenomenon had a reduced intensity compared to its initial stages. This episode, although in the context of a relative period of quiescence over the last few months, leads to paroxysmal phenomena of Salinelles, both in intensity and in the localization of eruptive mouths.
It can not be ruled out that the recent surface seismic activity near the villages of Ragalna – S. Maria di Licodia may have affected the state of stress which affects the flows of fluids that feed the Salinelles de Paternò, modifying their level of activity.
The detailed analysis of the three swarms described above is still underway by the INGV-Observatory.

Activity Summary:
No significant change. Kīlauea Volcano continues to erupt at the summit and the Puʻu ʻŌʻō vent on its East Rift Zone. The episode 61g lava flow is entering the ocean at Kamokuna. Surface flows are active above and on the pali and on the coastal plain. These lava flows pose no threat to nearby communities at this time. The lava lake surface is approximately 29 m (95 ft.) below the floor of Halemaʻumaʻu. Low rates of ground deformation and seismicity continue across the volcano. 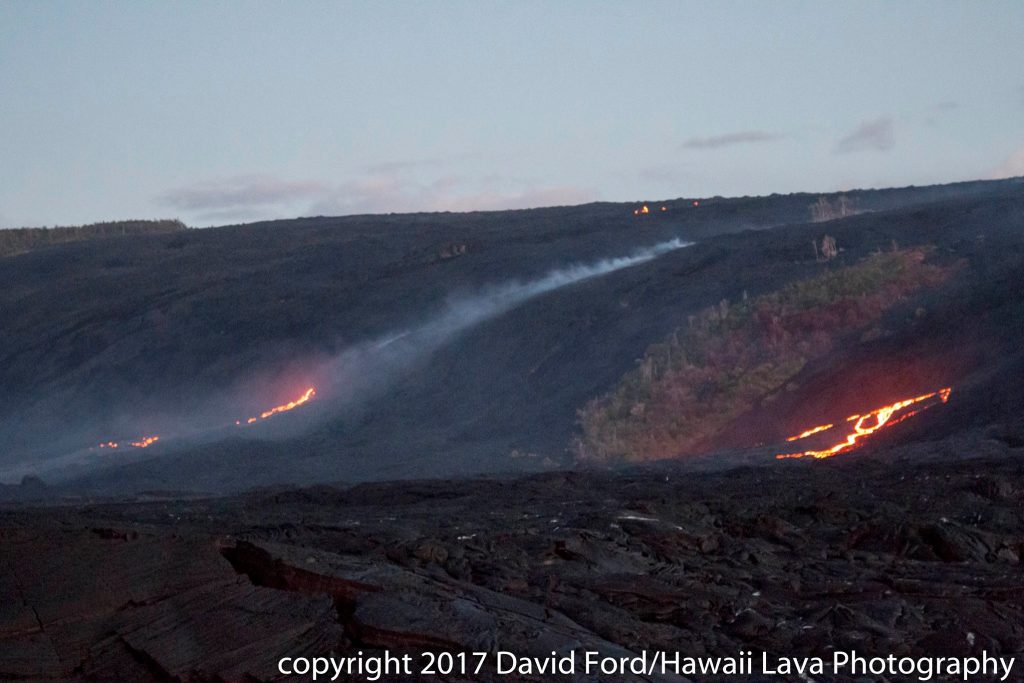 Summit Observations:
Tiltmeters at Kīlauea’s summit are recording inflationary tilt; with a net inflation of roughly 1 microradian over the past day. The lava lake surface is approximately 29 m (95 ft.) below the rim of the Overlook Vent, based on webcam images. Webcam views of the lava lake can be found at this webpage: http://hvo.wr.usgs.gov/cams/region_kism.php. Seismicity is within normal, background rates with tremor fluctuations associated with lava lake spattering. Summit sulfur dioxide emission rates remain high. 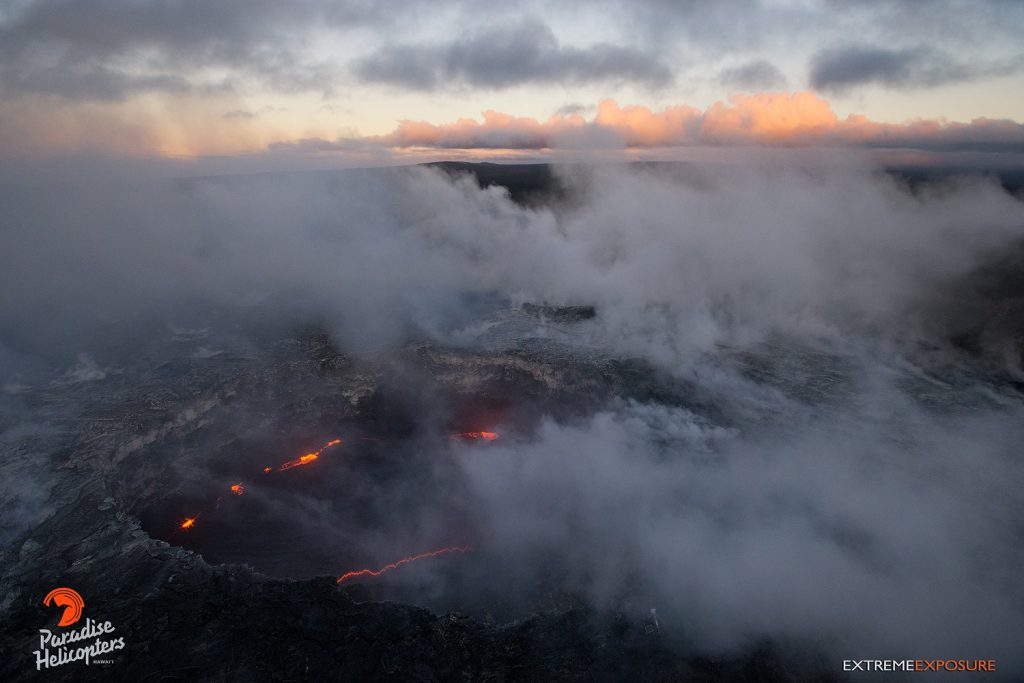 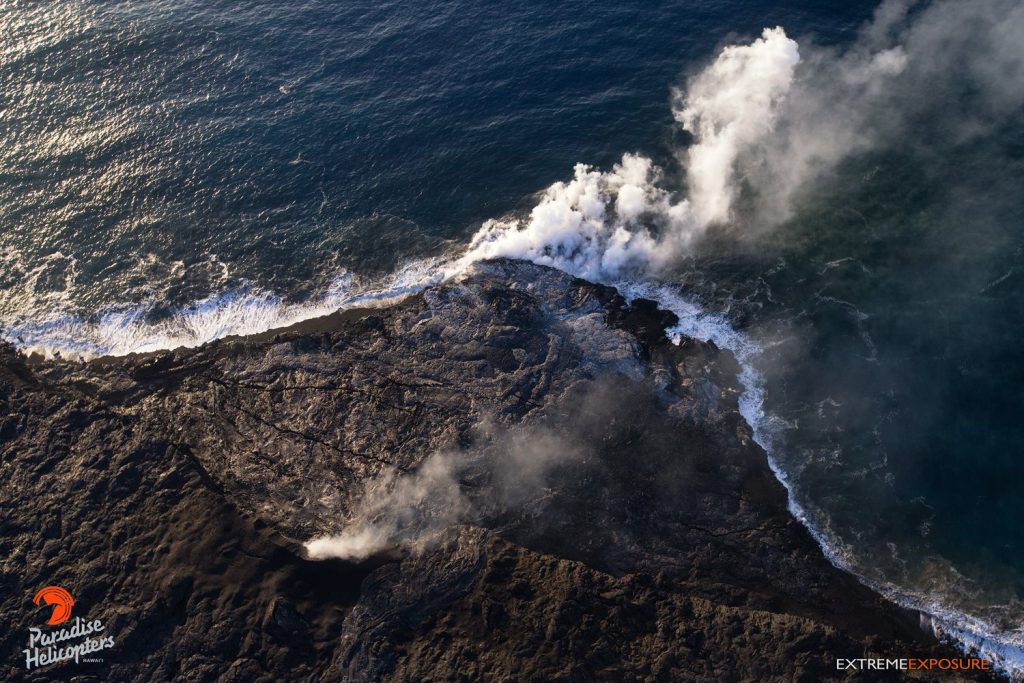 Lava Flow Observations:
The episode 61g flow is still active and entering the ocean at Kamokuna. Based on overnight web camera images, surface lava flow activity persists on the upper portion of the flow field, on the pali, and in scattered areas on the coastal plain. None of these flows poses any threat to nearby communities at this time. The cracks on the lava delta persist and highlight the potential of bench collapse into the sea.

Sismo – volcanic monitoring:
VTP (Volcano-Tectonic Proximal) earthquakes, linked to fracturing of the rock, maintain a rate of 23 VTD per day, similar to that recorded in the previous period.
Seismicity of VTD type (distal volcano-tectonic earthquake) showed a 73% decrease on the average number of daily occurrences compared to the previous period. In addition, low energy levels were observed.
With regard to hybrid events, associated with the deep movement of magma, they continue to register sporadically. During this period, 5 events were observed. The largest earthquake reached a maximum displacement value of 134 cm2 and was recorded on 18 August.

Location of events:
Hypocentral parameters were determined for 83 earthquakes related to rock fracturing (VT). The results show two seismic groups: the first, group A, presents the seismicity near the Ticsani volcano, with depths that reach 18 km in relation to the crater. On the other hand, group B, located 17 km south-east of the Ticsani volcano, can be observed with depths that reach 13 km from the surface.
The most energetic event was recorded on August 24 at 11:35 am (local time). This earthquake was a magnitude of 3.7 ML and was located 4 km east of Ticsani volcano. 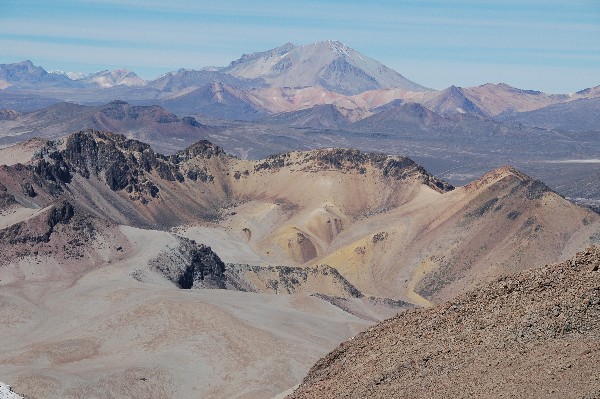 CONCLUSIONS
Seismic activity in the Ticsani region remains low. The predominant seismicity in this region is related to events related to rock fracturing.
On this occasion, VTP-type earthquakes continued with an average rate of occurrence of 23 VTP per day. The observed VTD seismicity decreased with an average of 14 VTD per day. Hybrid seismicity remains present, although rare.
In the spatial distribution of the seismicity, it is possible to see two groups of proximal and distal earthquakes. The most energetic earthquake reached a magnitude of 3.7 ML and was located 4 km east of the Ticsani volcano.
Any changes will be reported in a timely manner. 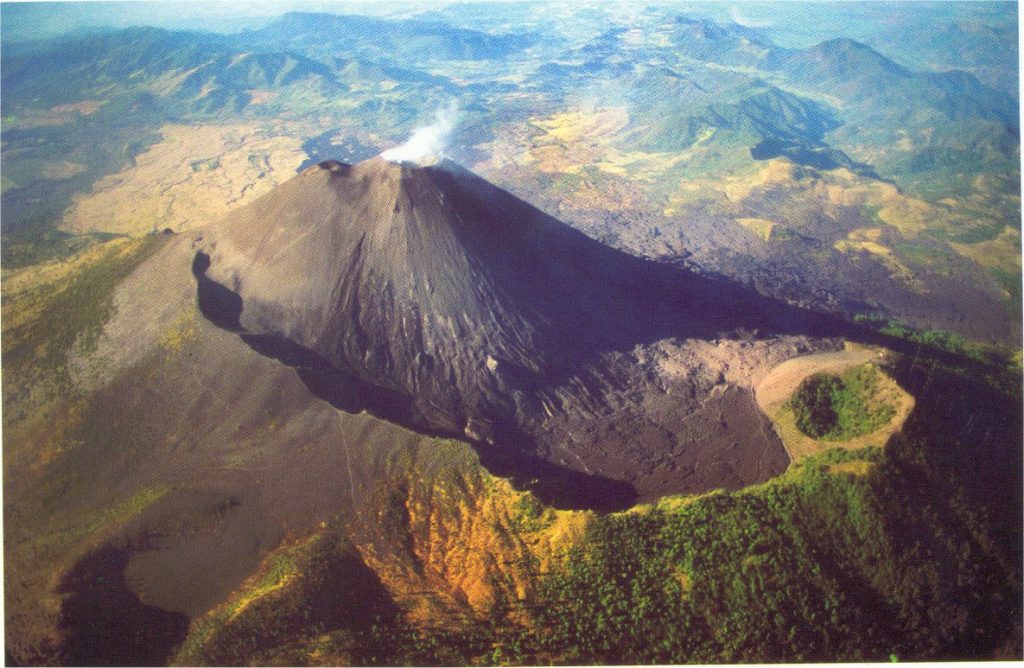 Activity:
Atmospheric conditions in the area of the Pacaya volcano do not allow observation of activity in the crater. The seismic station PCG records an internal tremor due to the ascent of magma and gases, as well as some strombolian explosions which generate degassing sounds at a distance of 3 kilometers. 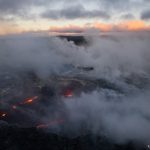 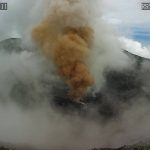